I have just uploaded a few images of the great little colonial game myself and Dave Lowe played this afternoon. It was based very closely around the  'Battle of Bronkhorstpruit', in the opening stages of the 1st Boer War. Well actually it was the very first battle (ambush) of the war, which you can find a great little article at the following site: http://samilitaryhistory.org/vol052gd.html 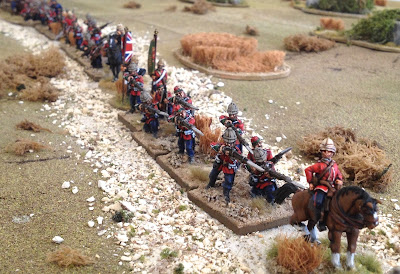 But first a little background to the game and why I thought it would be a great scenario to play. On the 5th December 1880 Lt Col Philip R. Anstruther, the commanding officer of the 94th Regiment departed the town of Lydenburg in the eastern Transvaal after receiving orders to retire on Pretoria 188 miles away. His column consisted of the battalion HQ, A and F Company of the 94th Regt, six members of the Army Service Corps, a surgeon and three men of the Army Hospital Corps, three women, two children, about 60 black wagon drivers and voorlopers, plus around 34 wagons (roughly 300 men, women and children) 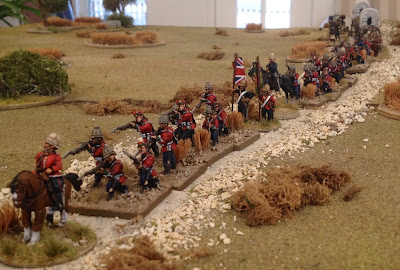 By the morning of the 20th the column was still well short of it objective however the Boers were fully aware of the columns approach and were in discussion of what to do next. At about midday on of the columns scouts spotted a party of mounted Boers several hundred yards to their front. Lt Col  Anstruther spotted another group of Boers of to the columns flank after a long survey through his field glasses....but declared they were just cattle? 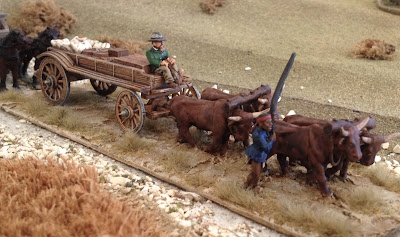 However the column pushed on for another 500 yards until it was about a mile from the Bronkhorstpruit River then suddenly the band stopped playing and a line of Boer horsemen were seen  on their left flank. Lt Col Anstruther ordered the column to close up and the men to get into formation with their arms. 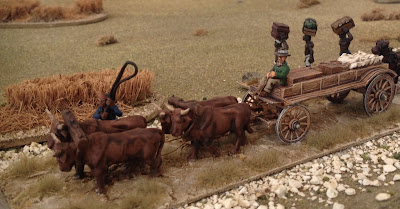 Gerry Webb of Castaway Arts was kind enough to loan this great Boer wagon for the game. 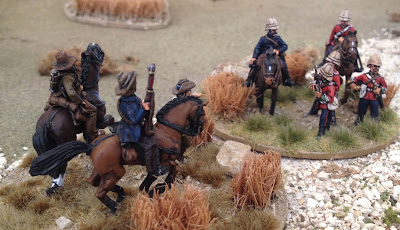 After a short time (only a matter of a minute or two) a Boer dispatch rider (Paul de Beer) approached the column under a flag of truce and handed Anstruther a letter. The letter basically stated that any further movement of troops would be taken by them (the Boers) as a declaration of war against......Anstruther refused to comply and roughly 15 minutes later over half of his men were either killed, wounded or captured. Our battle started about about the time of the LT Col Anstruther meeting with Paul de Beer (pictured above). On his refusal I then placed the ambushing Boer units onto the table and the game commenced in earnest. 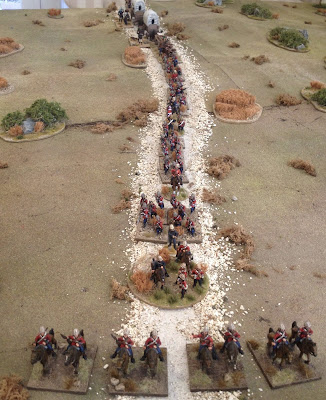 Turn one of our game found the British strung out in column with scouts out in front followed by battalion HQ's, the Battalion band, F Coy, the Regimental colours, A Coy, Quarter Guard and Provost escorts, the wagon train and then the rear guard. 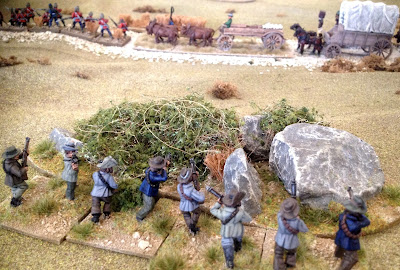 The Boers, with deadly accuracy, inflict a multiple of causalities on the British column. 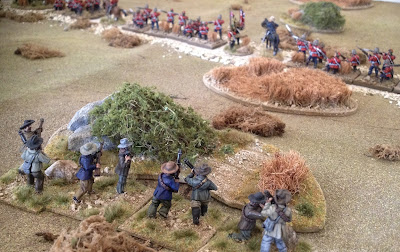 Unable to return the accurate fire of the Boers and with a number of company commanders killed in the first volley the British struggle to reform into line. 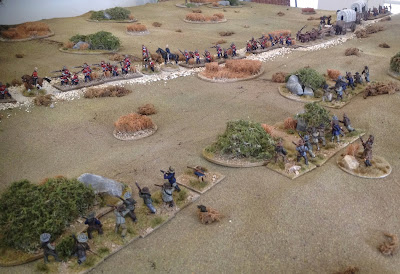 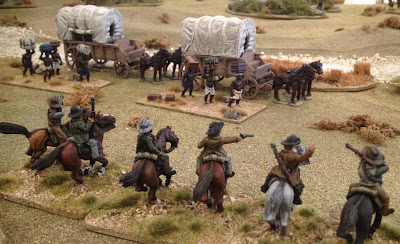 By our third turn mounted Boers attack the rear of the column, destroying many of the wagons and forcing the natives to flee 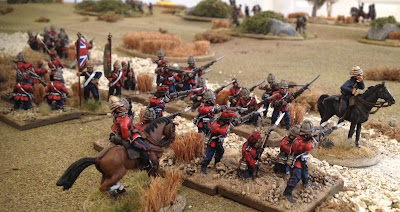 What was left of the infantry companies try to reform, but many more are struck down by Boer rifle fire. 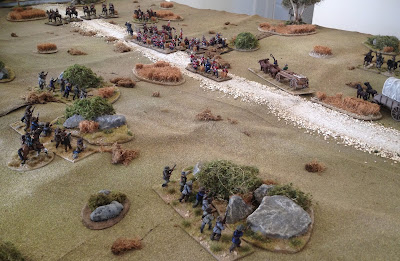 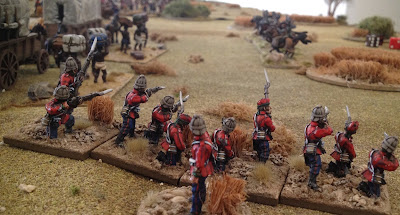 However the rear guard managed to put up a stout resistance for a number of turns only to shot down to the man. 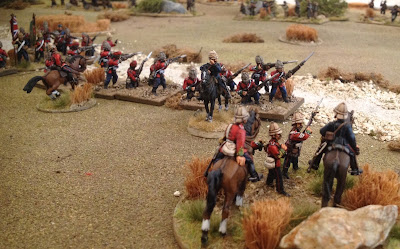 With the wagon train in flames or captured Lt Col Anstruther rallies the remnants of his battalion around the colours and directs the troops to make for the Bronkhorstpruit River. 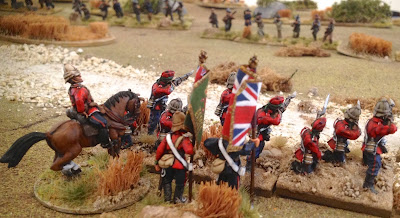 Mounted Infantry dismount and move to a position of support for the withdrawing troops. 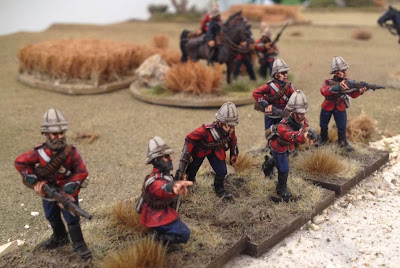 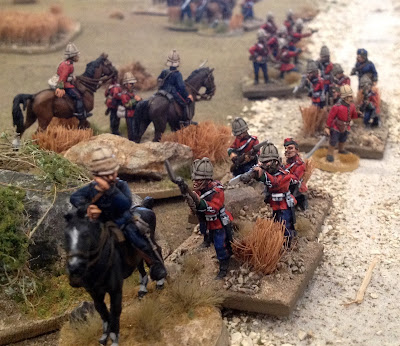 The remnants of A Coy make for the river in order to defend the crossing or died trying.

More mounted Boers close in on the rear of the column 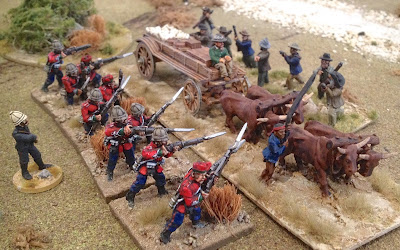 After recovering their weapons the members of the battalion band put up a fantastic defence of the last wagon. But after pushing back two Boer attacks and suffering 50% causalities they finally put down their weapons and went into captivity. 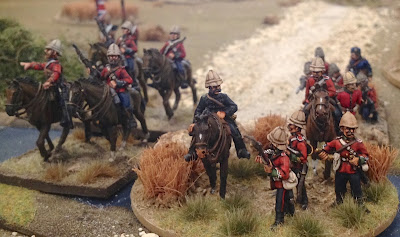 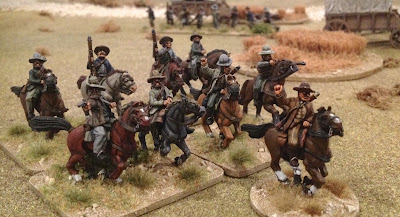 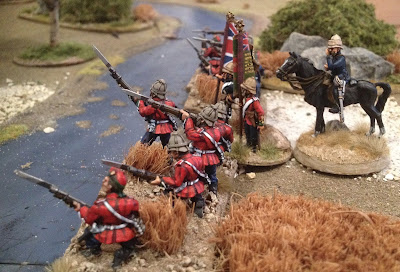 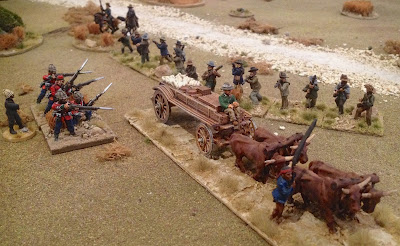 The last wagon is captured 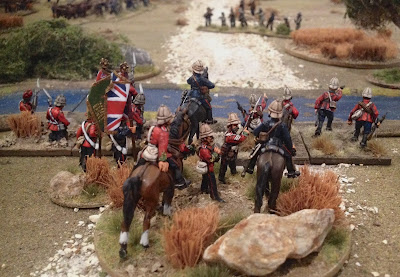 After surveying the battlefield through his binoculars Lt Col Anstruther realises the magnitude of his defeat - all the wagons captured or destroyed, four officers killed or captured and approximately 200 men killed, wounded or captured......but at least the colours have been saved.
Posted by Vinnie at 8:23 PM 14 comments:

Mr Ebob has been on top of the sculpting of late for Victor at Adventure Miniatures Australia ......and Victor is very happy to present his latest work ...... this unit is the legendry (Wheats Tiger Zouaves ) these little guys are now completed there are 13 tiger Zouaves in total.

Once completed you can look forward to seeing another union cavalry unit the 3rd New Jersey, and some general officers and maybe some dis-mounted cavalry forboth union and confederate forces sometime in the future.

Victor however is still finding it a little hard to get the figures into a mould so I believe he is in the process of purchasing a vulcaniser...hopefully soon as I would love to see these fantastic figures in my collection. 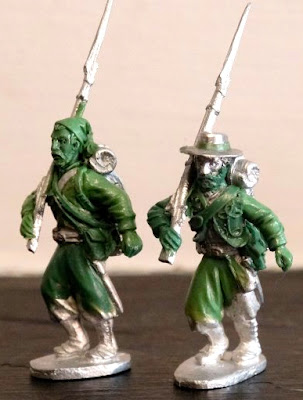