Fall 1863 - Probing for the Army of the Potomac Flank 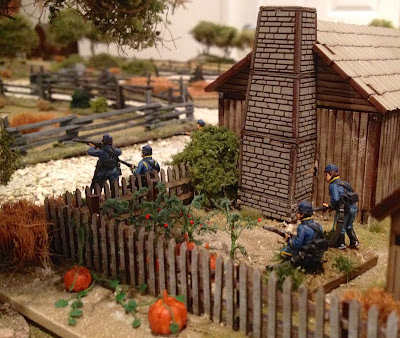 Last night the lads from the club had a great little ACW. The scenario was set in the fall of 1863 when after the Gettysburg campaign both sides were trying to regain the initiative. The period or the campaigns during this time allowed itself for some very interesting cavalry skirmishers and our game last night was bases roughly along those lines. 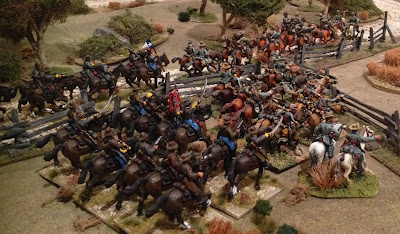 I placed the Confederates on the offensive with ten regiments of cavalry, in three brigades. Their mission was to break through the thin Federal cavalry screen and find the flank of the whole Union Army. The Federals, as you may have guessed was to hold or delay this manoeuvre for a period of eight turns. The Union cavalry screen consisted of only five regiments and a battery of artillery, decided into two brigades. However they were veteran troops and had all been issued with new the new repeater carbine.

In the opening turns two brigades of Confederate cavalry entered the table both coming down two alternate roads, at the western end of the table. The Union cavalry were deployed almost along the center of the table and started to construct hasty works out of the numerous rail fences in the area. This proved to be a very good tactical move for the Federals, as once the Confederates realised they were coming up against a well deployed and defended position, they changed their tactics and dismounted. 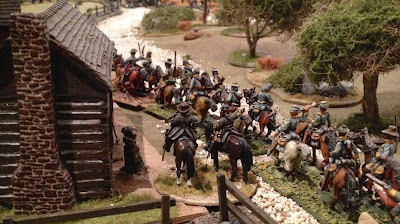 The dismounting of the Confederate cavalry worked well for the Federal commander, whose job it was to delay the rebel cavalry as long as possible. His troops wasted no time in preparing their positions and were soon laying down a devastating fire into the rebel dismounted skirmish lines. 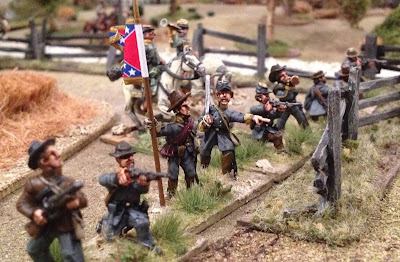 My newly painted and based dismounted cavalry proved hardy troops in last nights game. By the end of the game they had sustained heavy casualties and had to withdraw from the battlefield. 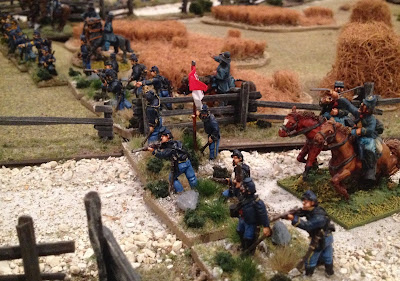 Union cavalry dismount and start to construct some hasty works 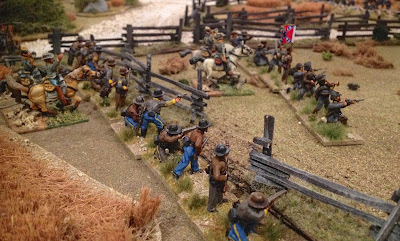 The Confederate commander wasted no time and soon after deploying two brigades in skirmish line (leaving one brigade still  mounted) he went onto the offensive. 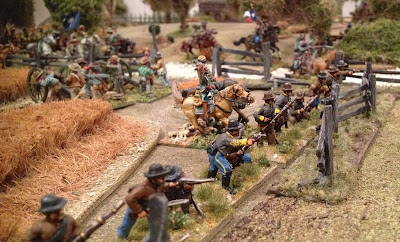 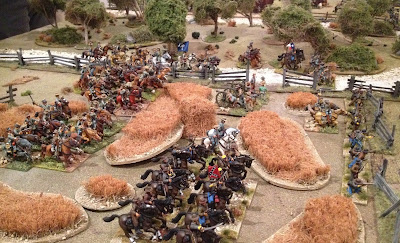 The Confederate reserve brigade moves up in support, waiting for an opportunity to charge the Federal lines. 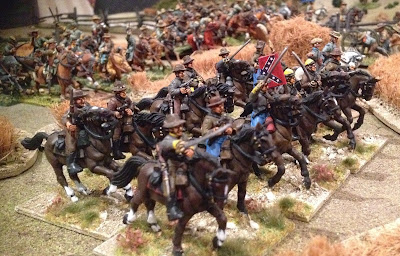 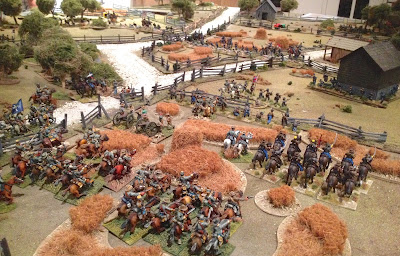 A great view of the battlefield from the Confederate right flank 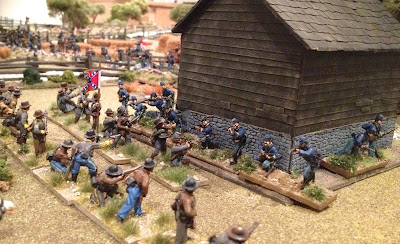 With troops deployed and well supported the Rebel commander advances his lines and soon come into contact with Union troops deployed in and around the outbuilding of a near by farm. 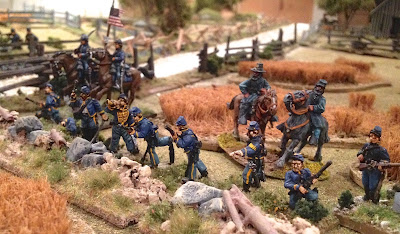 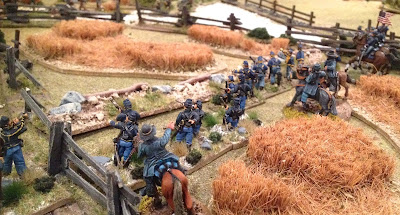 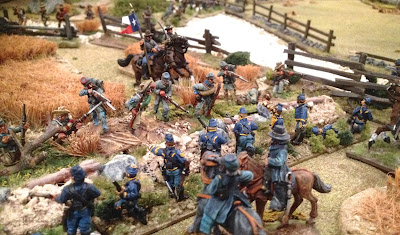 By turn six the pressure on the thin blue line starts to mount...as to does the casualties and the rebels see their chance to attacked all along the Union line. But they hold in the centre and on the the right flank and the Confederates are repulsed...... 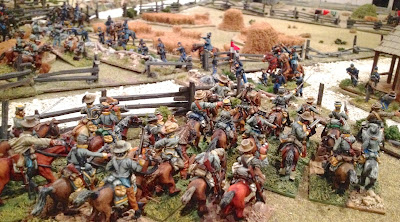 But with the falling back of the dismounted troops it opens up an opportunity of chance and the Rebel commander orders the charge. Two rebel cavalry regiments charge through the gap and after only a ragged volley from the Union troopers they overrun the position, capturing 120 Federal troopers prisoner. 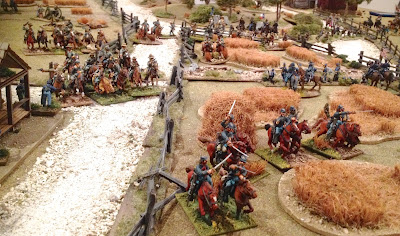 The remainder of the regiment flees....opening up a wide gap in the Federal line 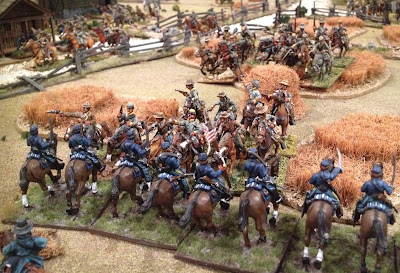 But the Federal commander leads by example and rallies his troops and counter attacks the Rebel cavalry driving back two regiments  and stabilising the Union left flank. 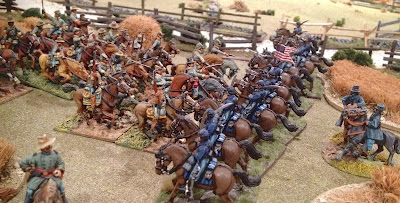 However all looked on the Union left flank and they seemed to be holding their own quite well. But by turn seven the Federal right had given way after sustaining %50 casualties and was forced to withdraw from the field.

Even though the battle was lost to the Federal commander he had held the Confederates (who out numbered him 2-1) back for a substantial time and saved the Army of the Potomac from a flank attack. 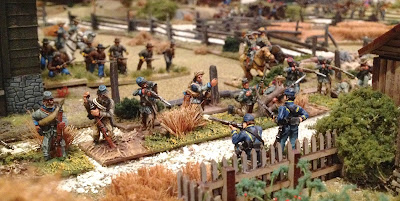 But victory no mater how small still went to the Confederates.

Finally back home and I have been able to base some newly painted Confederate dismounted cavalry. The figures have been painted by Leroy Simpson for my ACW collection and as usual Leroy has done a fantastic job on these lads. 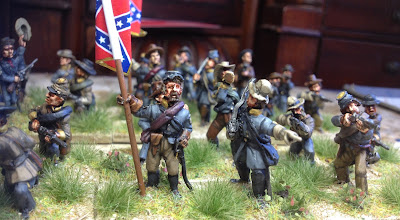 I have been reading a few posts on TMP lately and they seem to bag the Old Glory ranges of figures, however over the last couple of years Myself and the lads here in Townsville have painted quite a few Old Glory figures and we have been very happy with how they have turned out. The figures, compared to the more recent ranges may seem out dated however they still offer a fantastic range of multiple poses, in one pack, then any other manufacture I can think of. Plus you can not go past the multiple periods they produce and the value for money. So in other words I am very happy thus far with the Old Glory ranges I have painted and had painted. 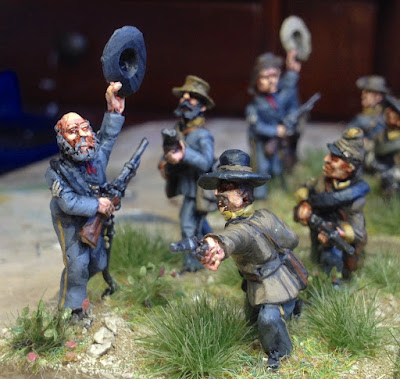 Leroy has painted two units of twelve dismounted cavalry for me, with my intention to paint at least two more units so that we can play some of the great little cavalry actions of the ACW, which to be neglected by most gamers. Our first will be tomorrow night, so stayed turned as there are more images to come. 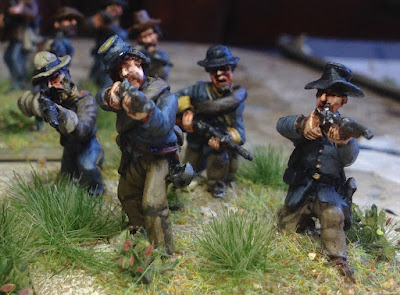 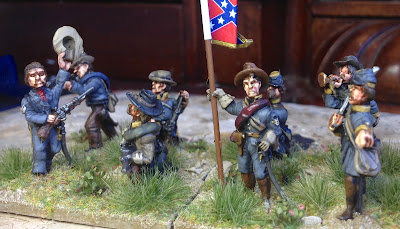 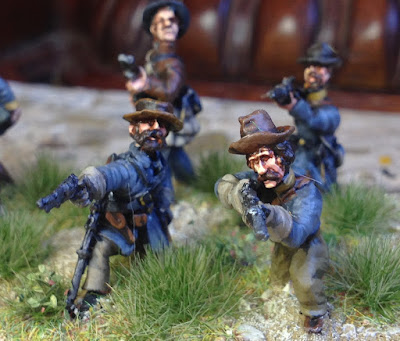 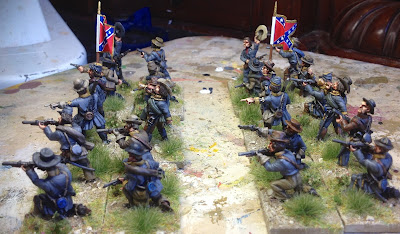 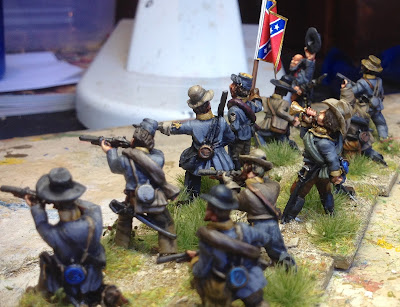 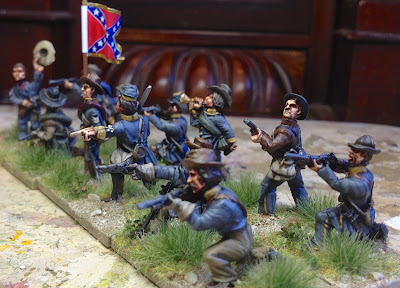 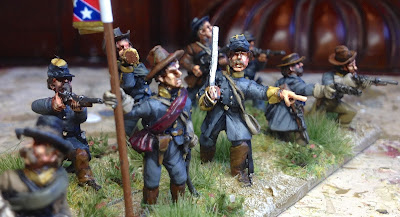 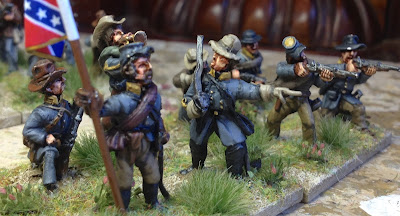 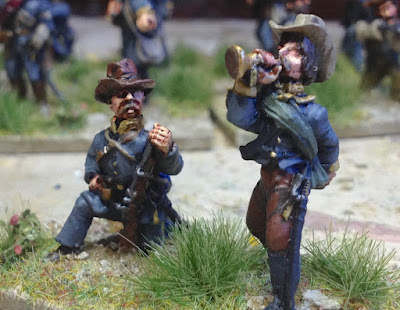