Last night we played two small games using Andrew Parr's 'Fortune & Glory' Rules. One was this great little ACW game using the supplement for F&G, which has a number of additional army list including the American Civil War. The scenario used was 'Contest Ground', which is where both sides place one objective marker each along the centre line of the table and must keep two units in reserve. The game systems allows basically six turns of play to either capture the objectives or to destroy as many of the enemies units as possible to gain enough points to win the game. 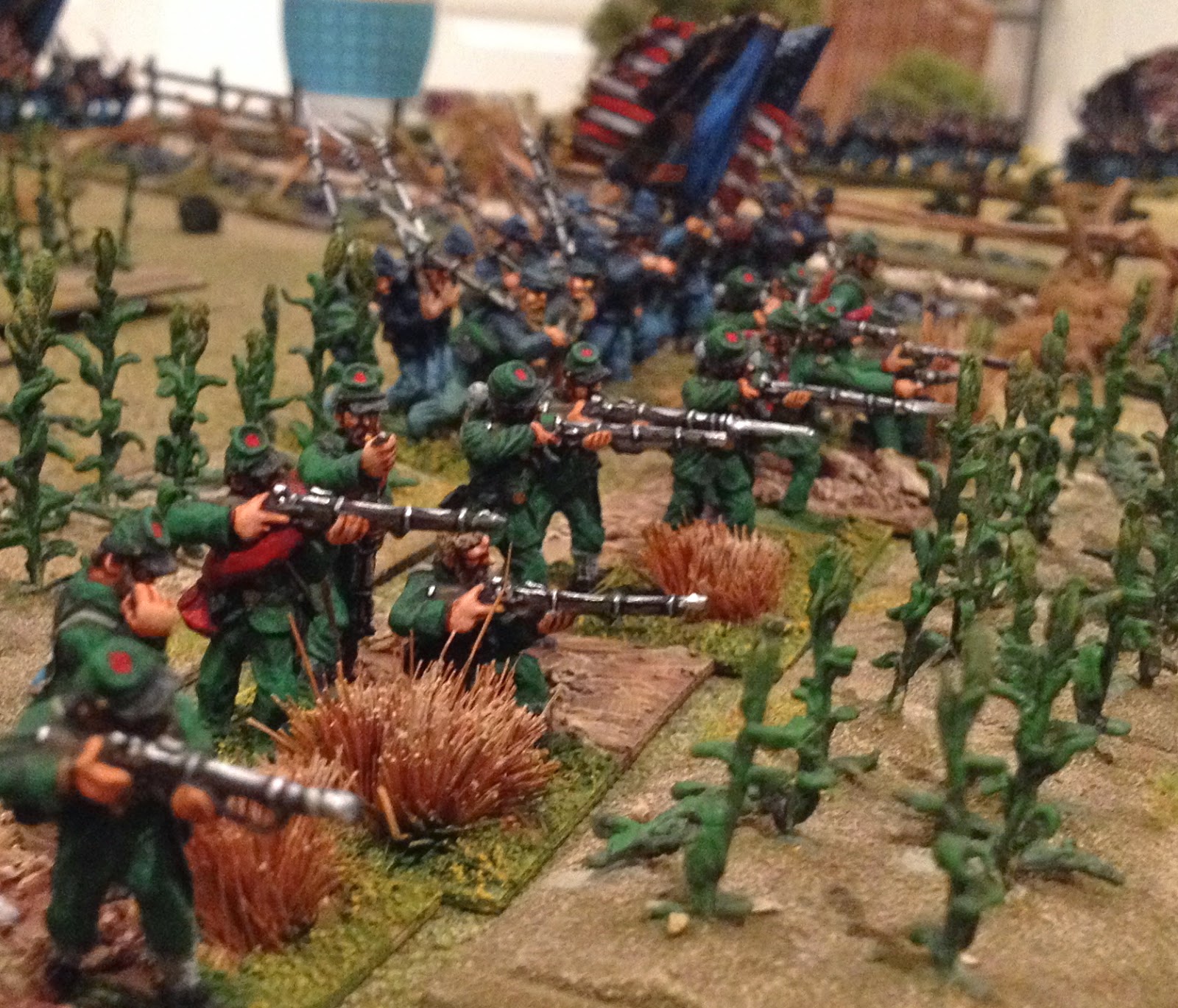 The rules state only four bases make up a unit of infantry or cavalry and artillery batteries two bases.  On each base there is place three to four figures for infantry and two figures for the cavalry. This is a good concept as it is a little easier on the wallet. However from looking at last night's game 24 figure regiments with six figures per base does look a little more attractive to the eye. 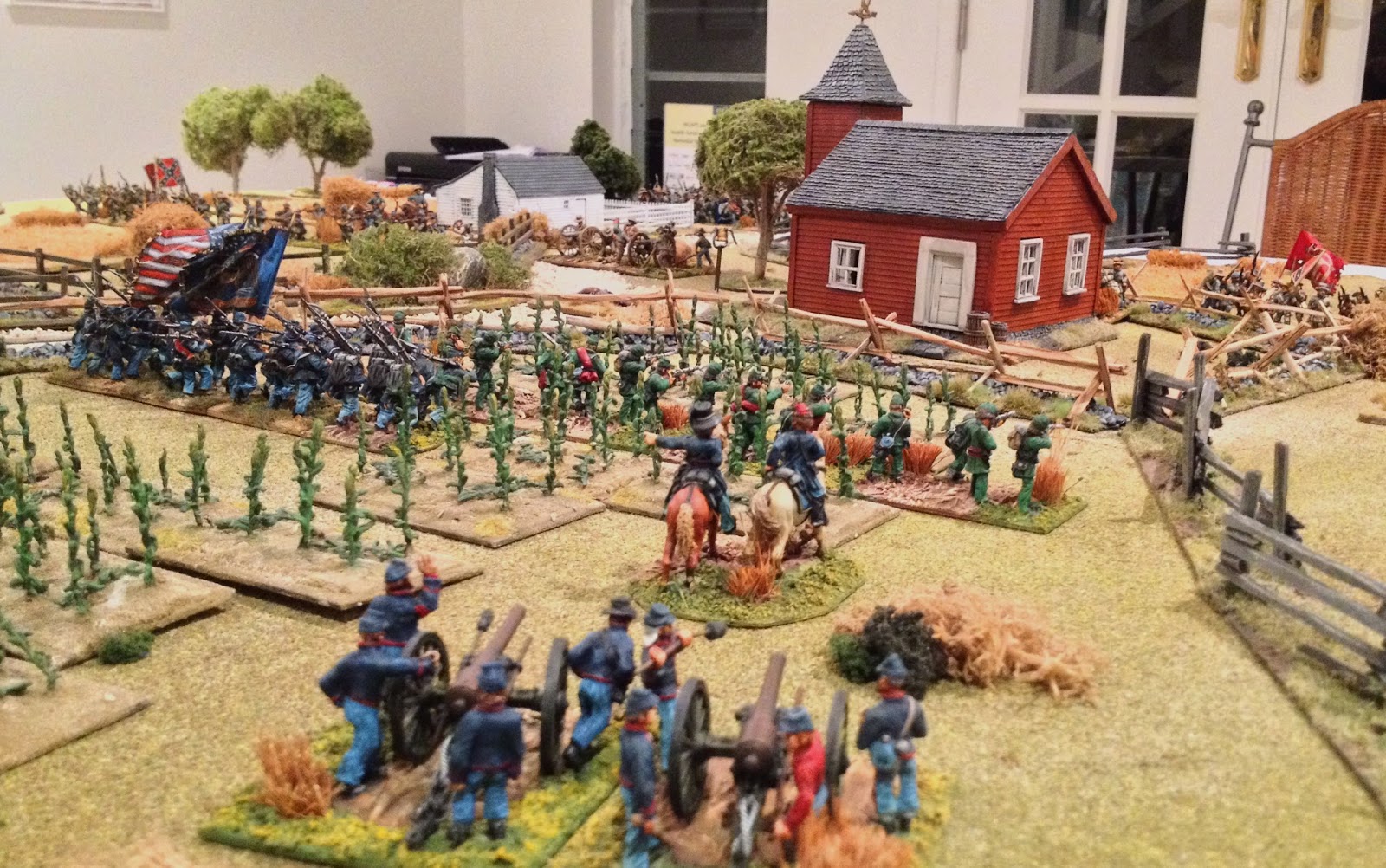 The boys did enjoy the rules and game with the Union player finally capturing the two objectives, which obtained him enough points to win the game. So please enjoy the images. Sorry some are a little poor as the lighting is not the best. 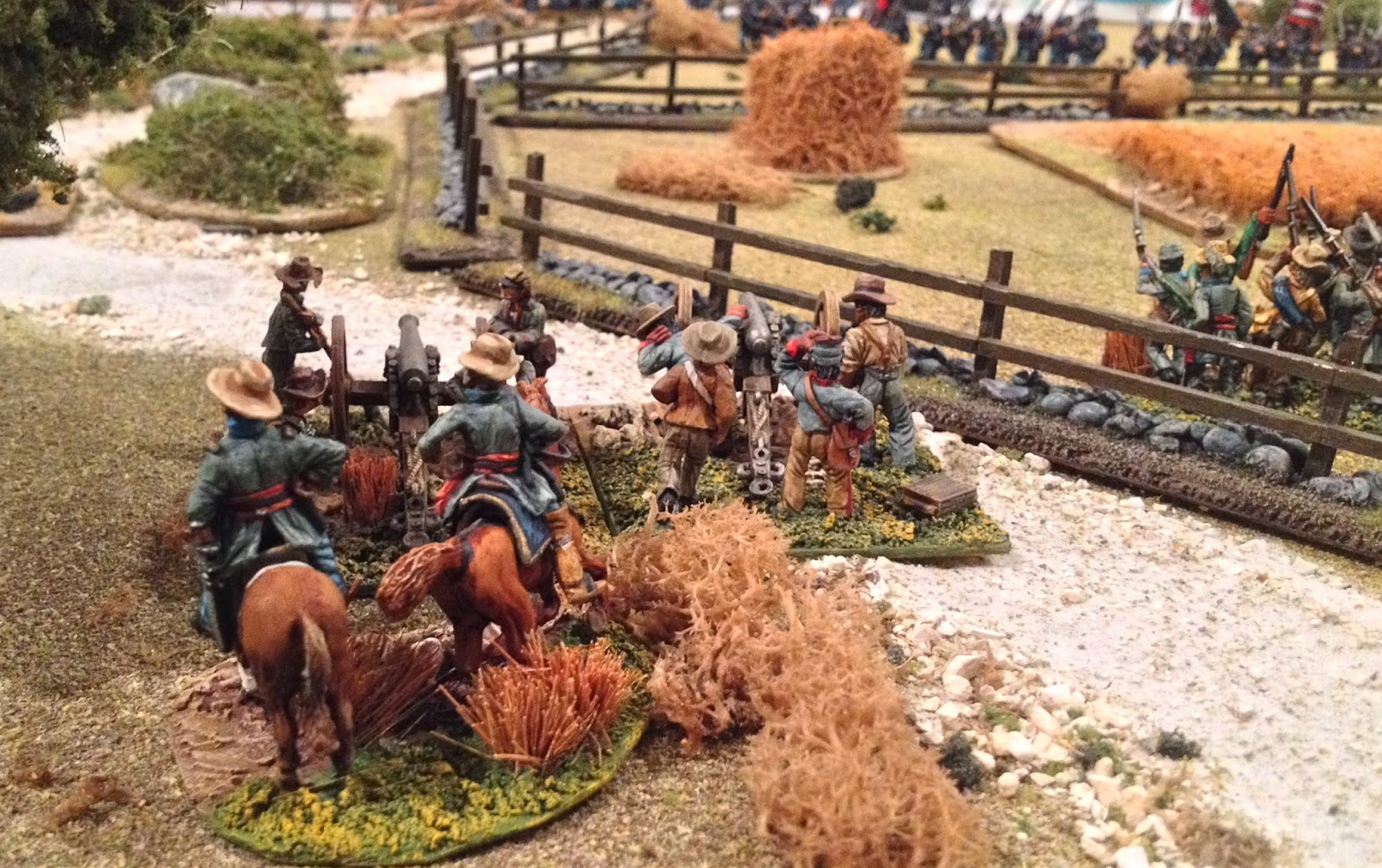 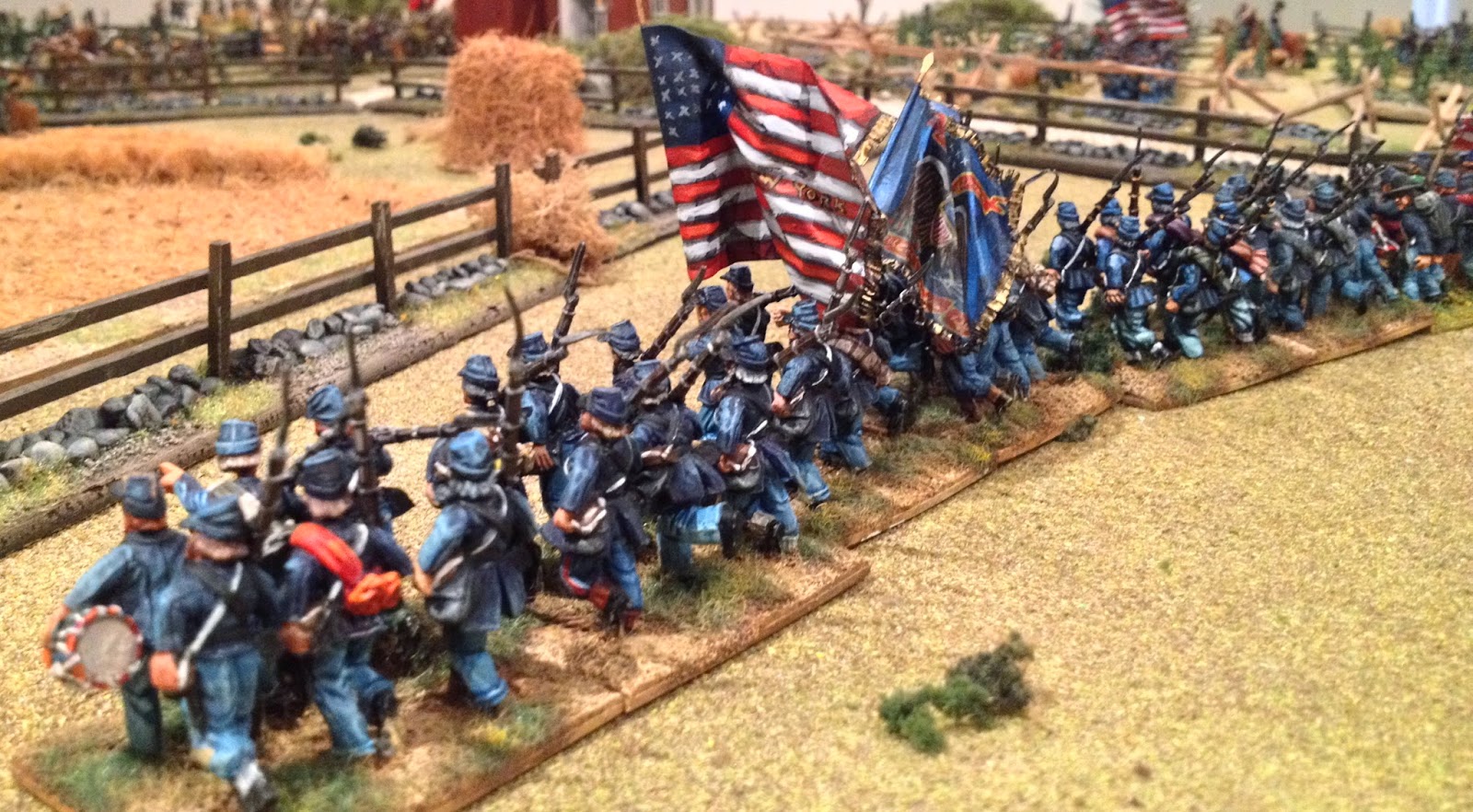 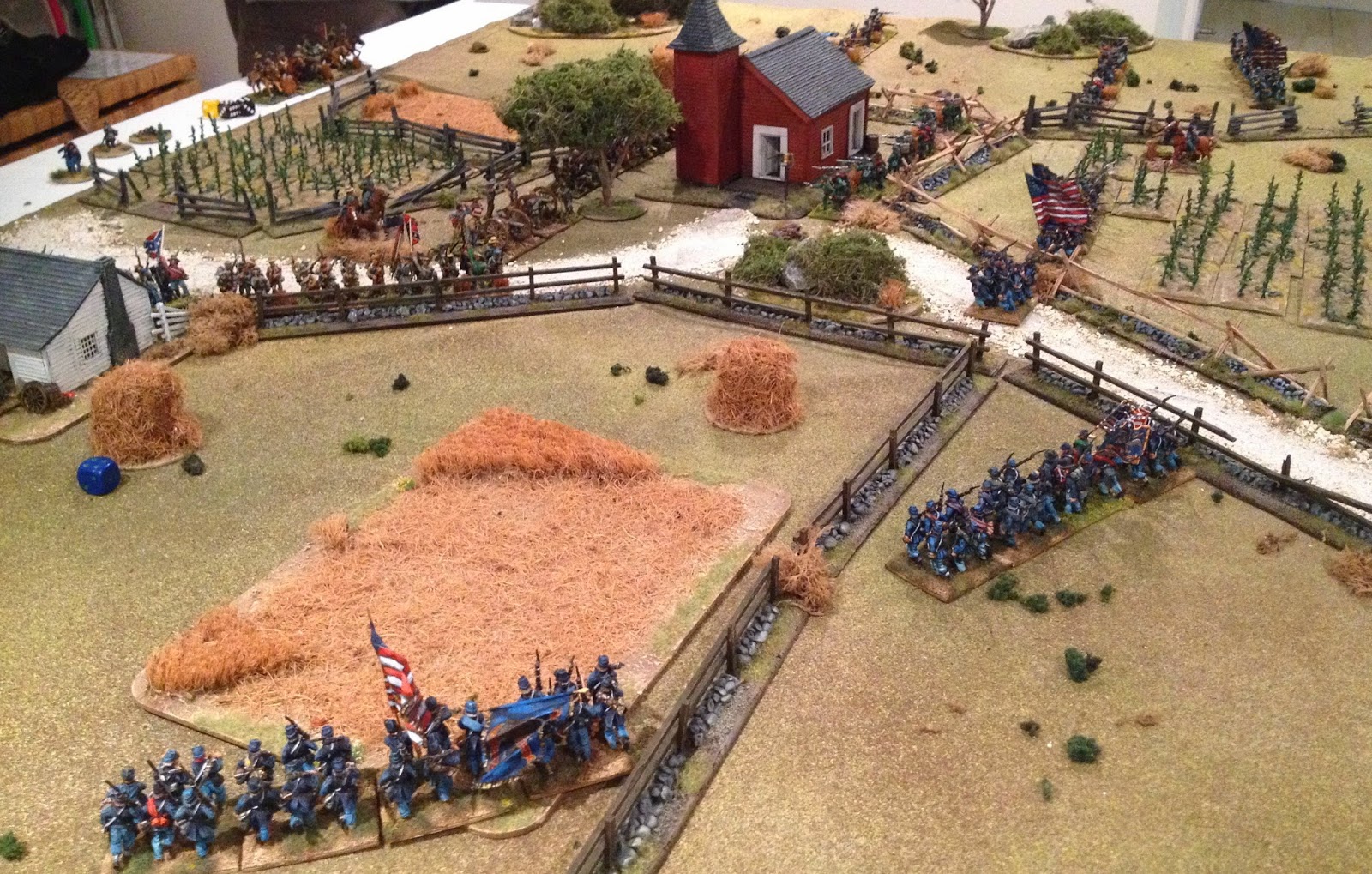 A small battlefield of 4x6ft allows for a fun but fast game. 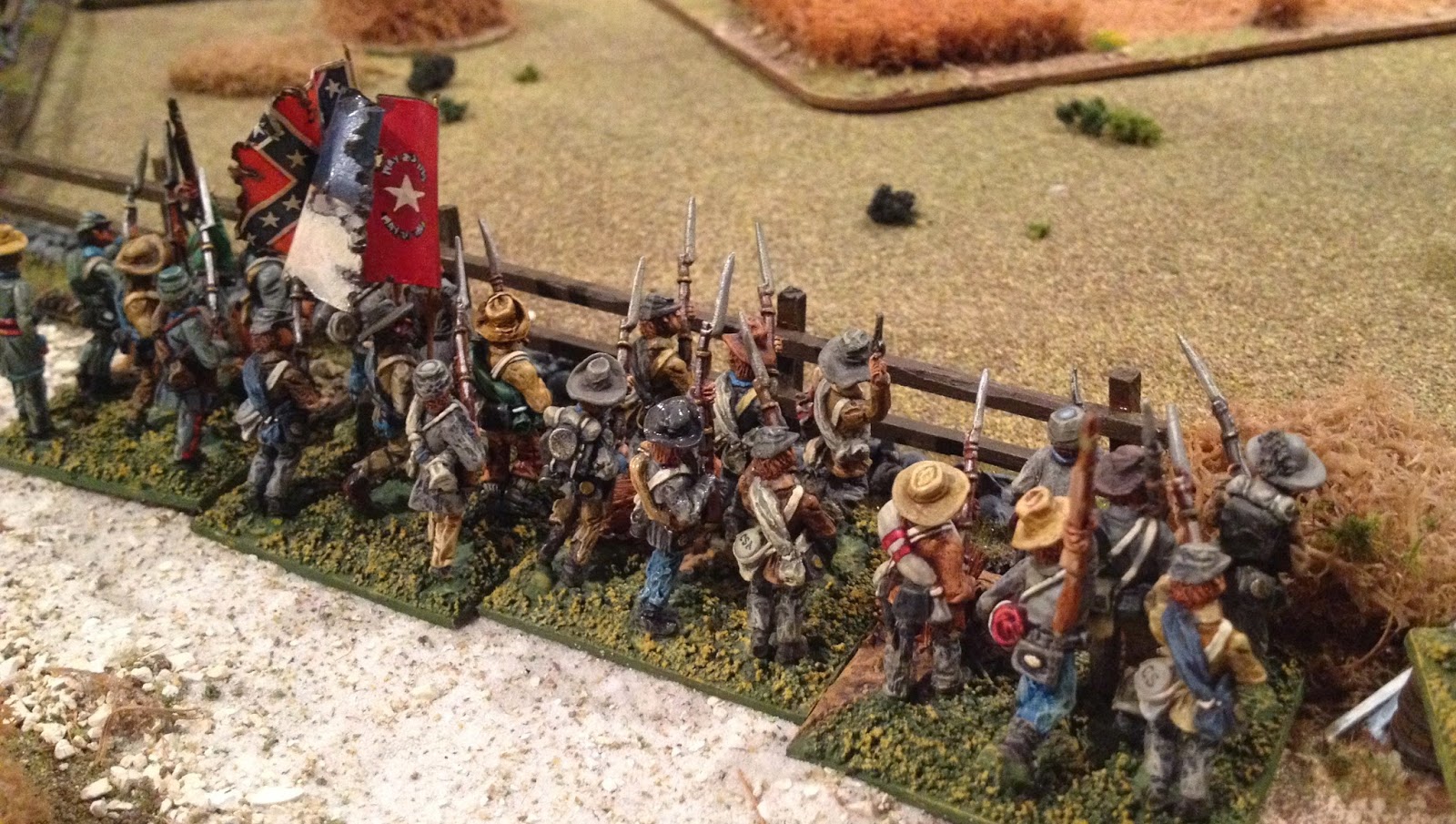 The Confederate commander decided to defend rather then attack, which stopped him from gaining any of the objectives. The Rebels have a nice force option which allows them to do the Rebel Yell. The yell makes the Union boys roll for morale, if they fail then they shoot shaken at the charging rebels. 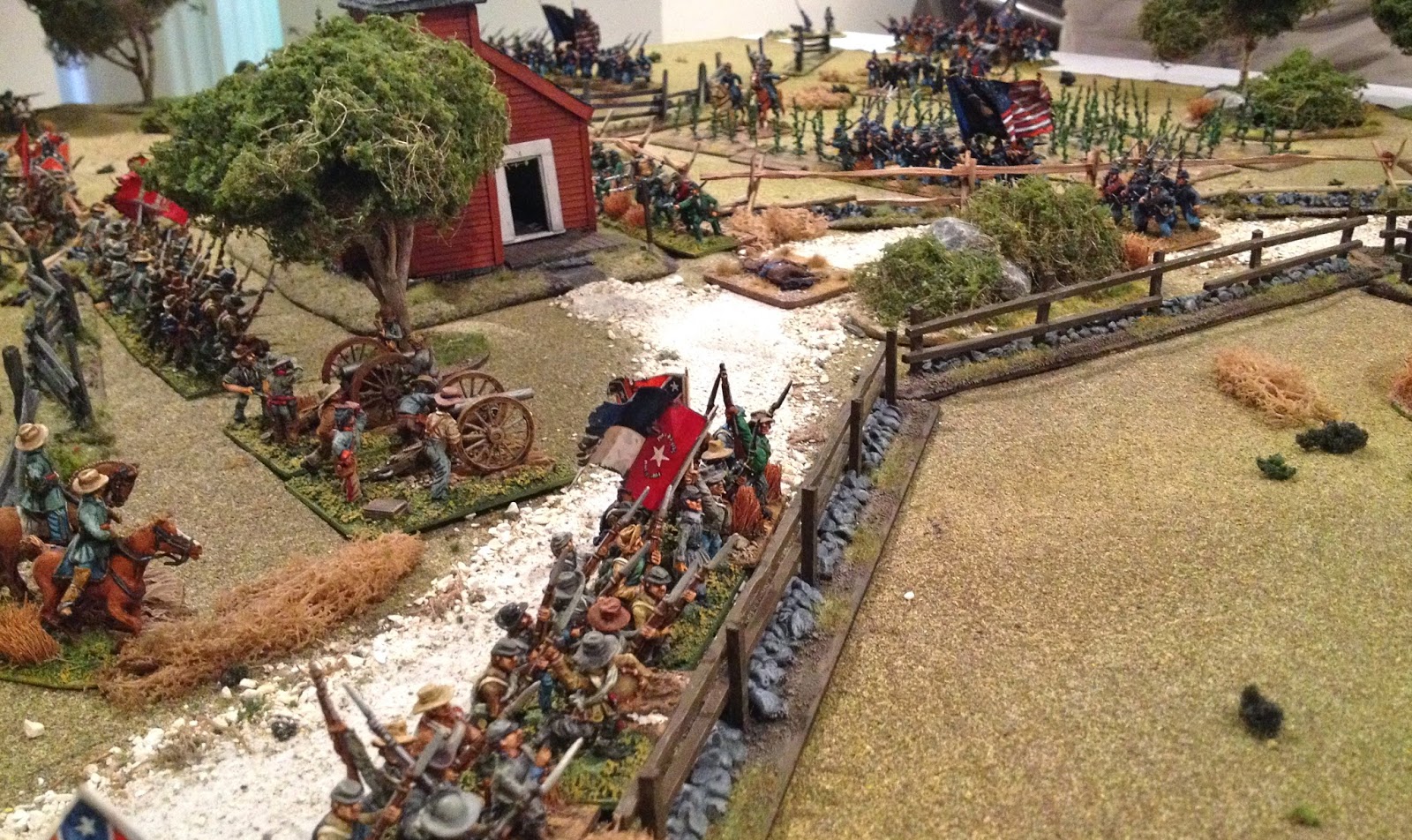 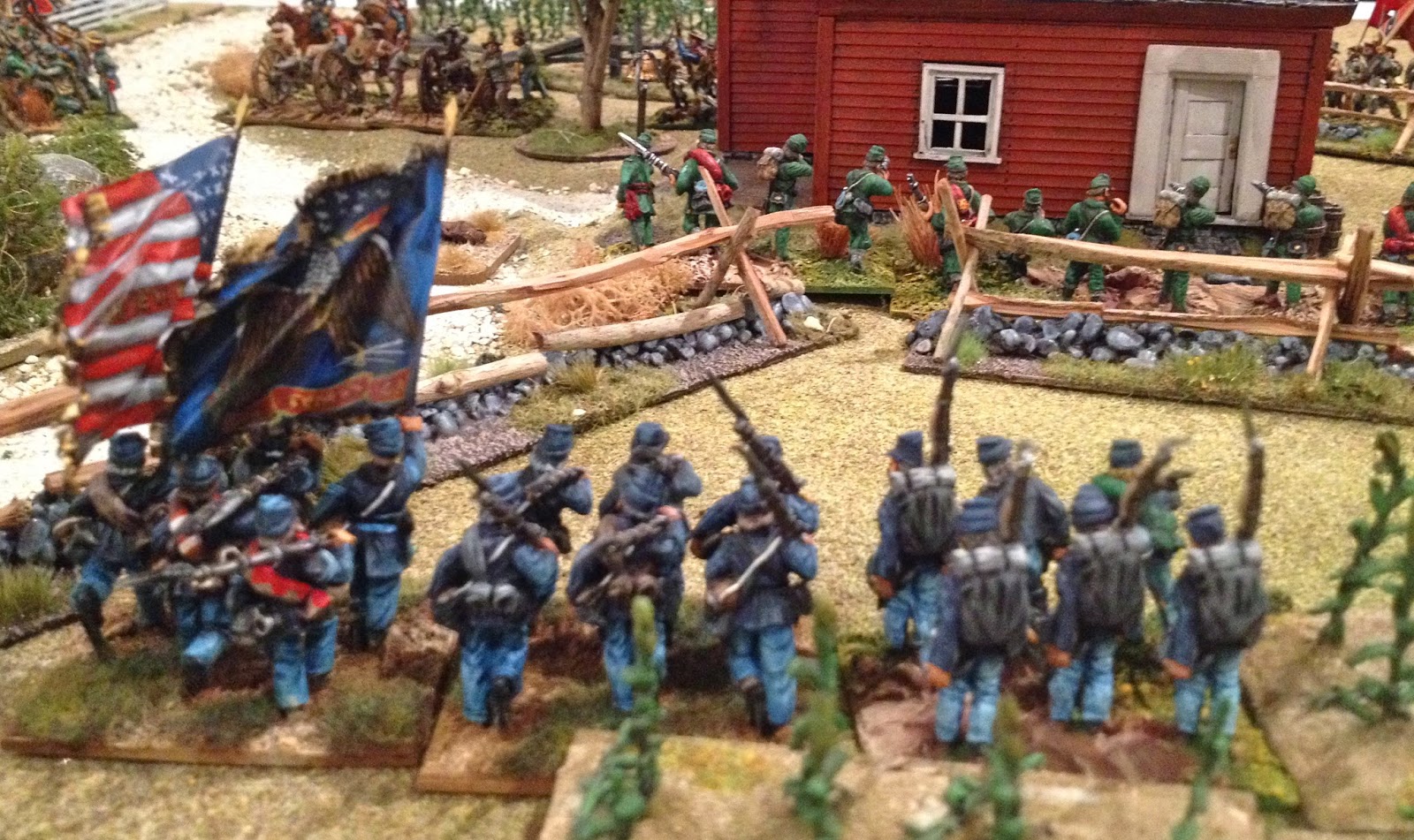 Marching through a corn field is not fun. Restricted movement and vision 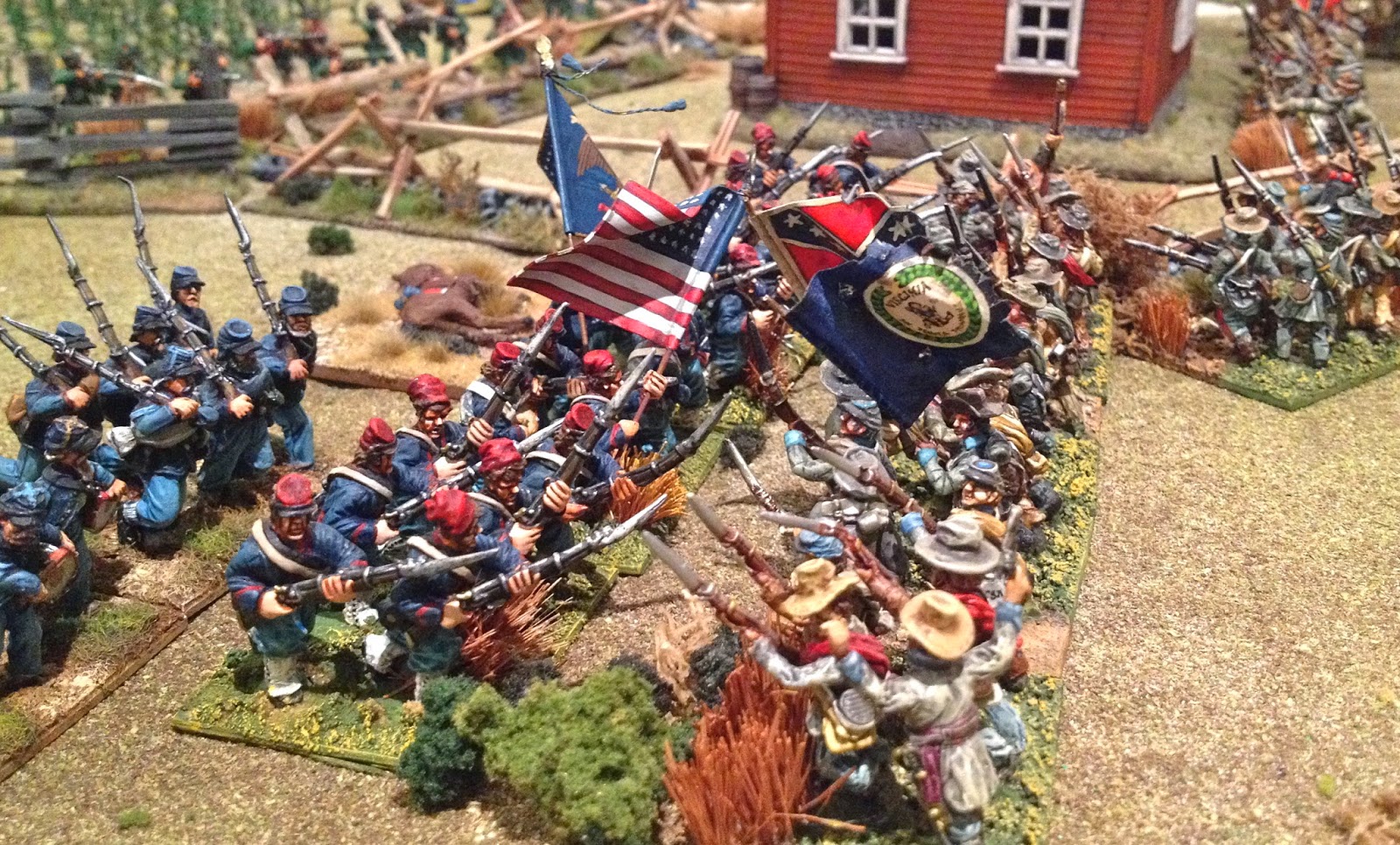 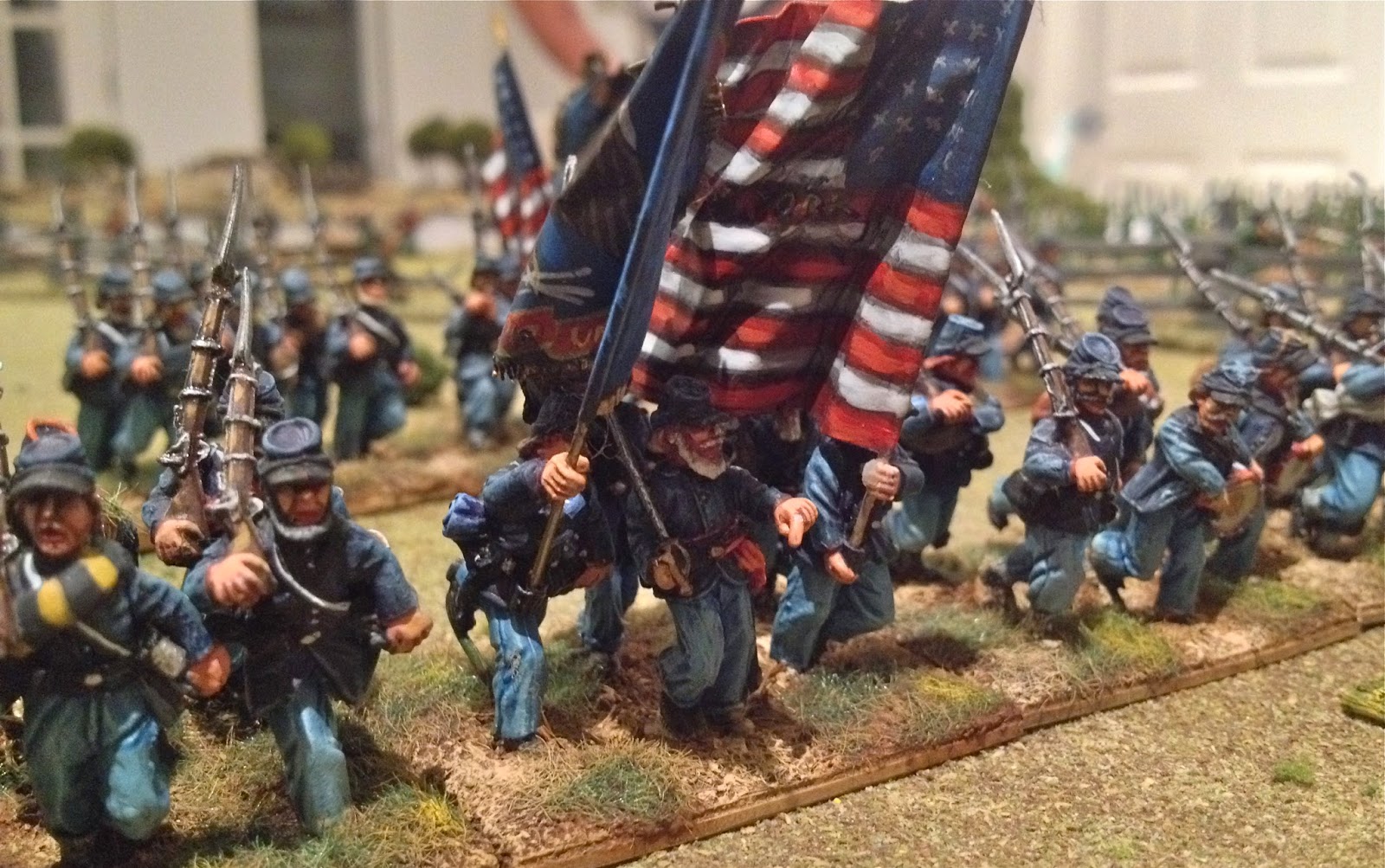 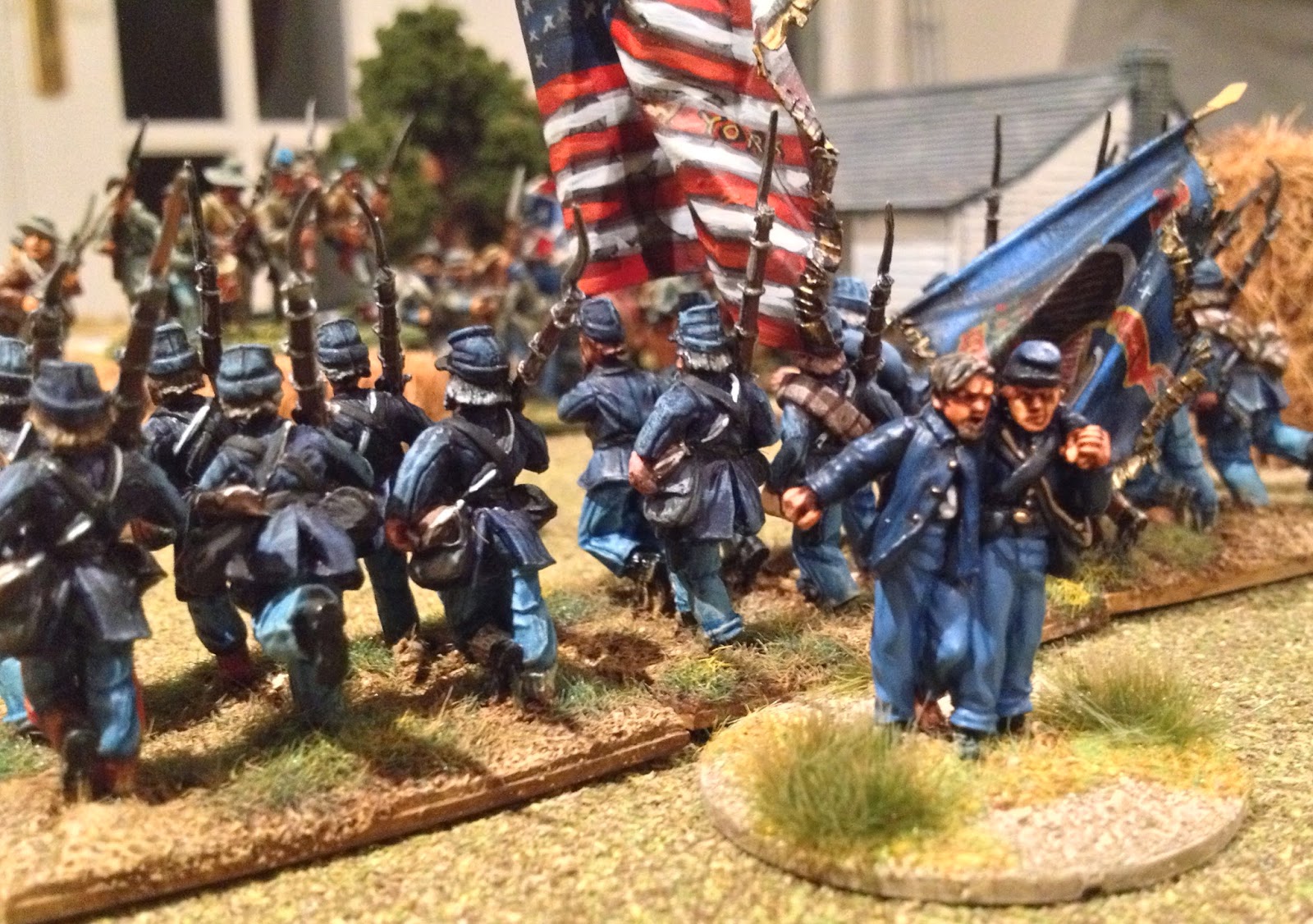 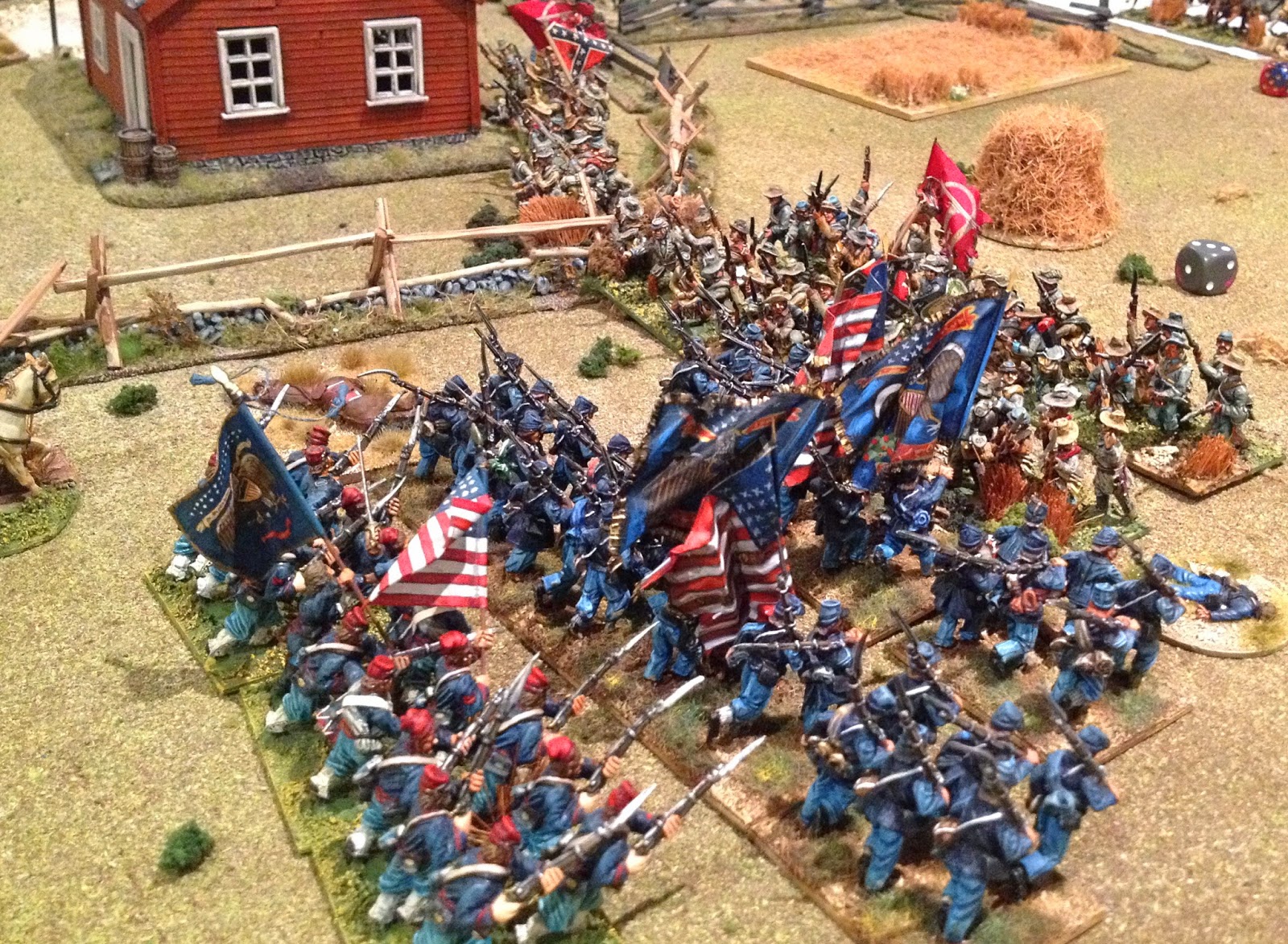 The last Union charge goes in. In the ACW variant of F&G regiments can gain a +1 for each unit on the flanks and a +1 each for up to two regiments in rear support...nice. So to gain a victory in hand to hand you need to always support your charge to ensure victory.
Posted by Vinnie at 7:01 AM

Looks like a nice game with a good amount of figures. The usual blue & grey provide a great foil for the Berdan S/S guys and Zouaves. Best, Dean

Thanks for the great comments guys. We have been playing quite a bit of ACW these last few months so I have tried to make the games interesting and pleasant to the eye. So I am very happy with your comments.

I like the idea of 4 bases, what does a F&G rules set unit represent brigade or regiment?

if the rules are for regimental level what do you do about the under or over strength units i.e. 900 men 600 men 325 men do you increase or decrease the number of bases or number of figures?

Hello Phil thanks for the comments. In regards to the rules they are a regimental based game involving units of four bases, however additional bases maybe purchased but normally only the one base to make them larger. We have however played scenario games, disregarding the points system, with up to ten bases on some units and as little as three on others, working on each figure represents 50 men. It plays well enough to have large games over in a few hours.

Some great pictures and a good report!

Thanks for your reply I like the Fortune and Glory rules and ideas you guys played. the units look great with your figure scale etc. are the rules still on the drawing board or available online?

um..any chance you switching on comment "reply" option? Threaded commenting allows a reader to reply to other reader comments or your comments directly

Go to settings > Post and Comments > under Comments > Comments Location > chose the “Embedded" option as opposed to “Full page” or “Popup window.”

Rules are available on line through the Elite Miniatures Australia Website:
http://www.eliteminiaturesaustralia.net/Rules--Fortune---Glory-.html

Your ACW collection and the way you keep presenting them in pictures on your blog is, I have a feeling going to get a lot more of us interested in this period. Superb work all round.
Pat.