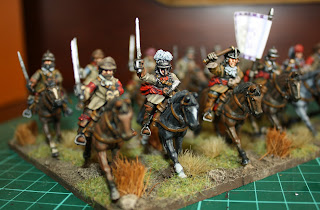 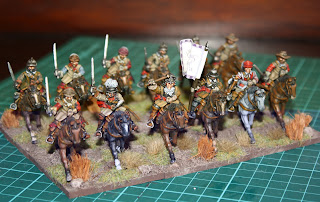 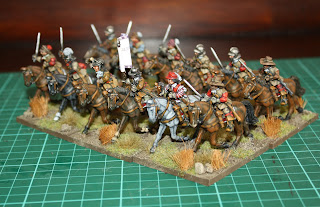 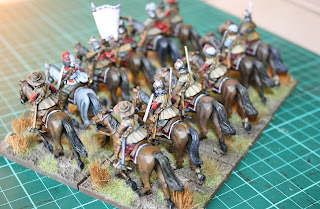 Fellow Lonely Gamers it falls upon me to fill in for Nathan while he is away bringing democracy and Mc Donald’s to the people of Afghanistan. Although I doubt I shall be as prolific as Nathan has been recently I shall do my best to give you all a bit of eye candy until the safe return of himself and his unit.

First topic will be my recent excursion into the English Civil War. After many years of procrastination and threats of doing something I finally purchased my first Royalist units for this period. Based to my previous experience of painting their Scots for my close friend Gavin I looked little further than Renegade. As many of you would be aware, this companies figures are a fantastic solid figure with an impressive stature which almost impose their will with just their presence let alone putting them into a solid pike block of 40 figures (no whimpy plastics for this gamer!). The figures are very well sculpted with plenty of rips, patches and variation in cloths to provide you with heaps of scope for a campaign look. This combined with their very reasonable army deals make them good value.

On the down side, although the army deals are great value they will let you down with the limited cavalry provided, coupled with a lack of command figures. To fix this issue you cannot purchase command packs for the Cavalry but instead you are forced to purchase a pack each of what you want. This can eat into those savings you made and adds a bit to that spares box of heavy metal that threatens the foundations of the average gamers house! Also due to the positioning of the figures within the moulds many will have mould lines that run down the face of your figure which can be a real chore to try to remove to a respectable standard. A couple more issues exist which I will deal with as new units are posted but none are dramatic enough to put me off purchasing this great range of figures.

My first completed units is this cavalry which I thought would be a nice way to ease into painting figures for this period. Of cause the standard comes from the always impressive GMB Designs. All the colours used come from the Games Workshop and Vallejo ranges and although initially struggling with finding the right hues for the jackets I think the figures came up well and I am quite happy with the finished product. Although looking at the English Civil War figures painted by Saxon Dog make me want to throw my paints in the bin and take up another hobby.